Cricket C. Wilbur, PhD, is a 2013 graduate of the PhD Program in Environmental Studies at Antioch University, New England. 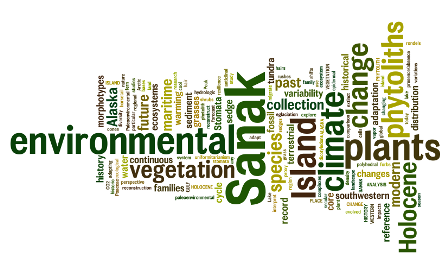 Wordle of this dissertation's abstract.

This study investigated a terrestrial climate proxy, phytoliths, as a complimentary approach to documenting the dynamics of present and past vegetation on Sanak Island, the largest island in a small island group in the eastern Aleutian archipelago, and as a new basis by which to interpret Holocene environmental variability in Alaska. A phytolith reference collection was established from 59 selected plant species of maritime tundra belonging to 27 families. The grass species and a sedge species produced abundant phytolith forms whereas the majority of dicotyledons in this study were trace producers of phytoliths. A paleoenvironmental reconstruction from fossil phytoliths recovered from a continuous lake sediment core indicates that sedges and cool season grasses were present on this landscape throughout most of the Holocene suggesting the long-term dominance of maritime climate on island vegetation. Adaptation and resilience of the modern vegetation on Sanak Island to a warming climate is suggested by the densities of silicified stomata recovered from six species of grasses, one species of fern, and one species of horsetail when compared to the paleoenvironmental reconstruction. The changes in stomata frequency in the plants on Sanak Island today may have connections to future changes in regional and global climate through the water cycle. Our changing climate is forcing ecosystems to migrate, acclimate or go extinct demonstrating that new insights into ecosystem responses to present and past environmental variation, and forecasting future ecological change are especially relevant today for ecologic and economic sustainability. The electronic version of this Dissertation is at OhioLink EDT Center, www.ohiolink.edu/etd. 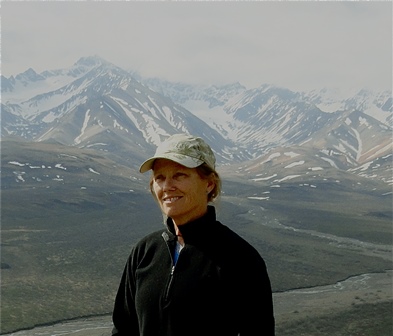 Cricket Corwin Wilbur received her doctorate in Environmental Studies from Antioch University New England, her MS in Geology from North Carolina State University, and her BS in Geology from St. Lawrence University.Her research interests are in terrestrial records of past environment variation to understand ecosystem response to climate change.Most of her work focuses on paleoenvironmental reconstructions in Alaska and how ancient ecosystems can inform present and future ecologic change. She is an AmeriCorps alumni, an academic and an interdisciplinary researcher, and active in conservation organizations in her home state of Massachusetts.