Sites of Passage: Art as Action in Egypt and the US-- Creating an Autoethnography Through Performance Writing, Revolution, and Social Practice

Dr. Tavia La Follette is a 2013 graduate of the PhD Program in Leadership & Change at Antioch University. 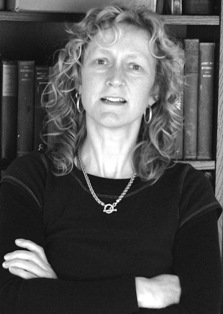 Originally from New York City, Tavia La Follette is a director, designer, curator and performance artist. In the fall of 2010 she joined Carnegie Mellon University’s Center for Arts in Society as the first Artist-in-Residence where she completed her doctoral research on The Firefly Tunnel Project (www.fireflytunnels.net). Tavia earned her MFA in Performance-Pedagogy from the University of Pittsburgh and recently completed her PhD in Leadership and Change at Antioch University. Her work has toured all over the United States, Europe, South America, Asia, North Africa and the Middle East. Her work has been the subject of articles such as the Economist, Rolling Stone Magazine and the New York Times. Tavia is also the Founder and Director of ArtUp, a non-profit arts organization whose mission is to bridge a language of peace through the actions of art. ArtUp is a border crossing space for artists and companies that are concerned with exploring the contextual inter-relationships of theater, visual arts, movement, media, and sound. The work and archives can be seen at www.artup.org.

As a performance artist and arts activist I present my research project to the audience in performative writing, a postmodern research style that advocates the integration of the artist/researcher identity. In the summer of 2010, I left for Egypt to teach a performance and installation art workshop at Artist Residency Egypt, the first step of the Firefly Tunnels Project, a virtual and tangible exchange between artists in the United States and Egypt. This venture began with the awareness that the 10th anniversary of 9/11 was approaching. What I could not have foreseen were the other world events that would have a direct impact on the project: Arab Spring and the Egyptian revolution, the Occupy Wall Street Movement in the United States, the execution of Osama Bin Laden, and presidential elections in both the United States and Egypt. Sites of Passage, the final exhibition, ran from September 9, 2011-February 14, 2012 (extended) at the Mattress Factory Museum, one of the only installation art museums of its kind. The exhibit included site-specific works, curatorial tours, discussion panels, workshops, community outreach, and a performance series. I curated all of the artists into the three workshops held in Egypt and the United States, which were compulsory to the exchange process. This document is a performance ethnography that includes an auto-ethnography providing thick description of the experiences and events of this bicultural journey. There are eight videos in mv4 format, plus images to help give dimension to the work. Theoretical dispositions will also be performed throughout the document. The electronic version of this Dissertation is at OhioLink ETD Center, www.ohiolink.edu/etd.

This dissertation is accompanied by 8 videos, including an Author's Introduction. These videos are directly accessible within the PDF and also attached below. The Firefly Tunnel Project website is found at http://www.fireflytunnels.net

Below: Two images from this dissertation : 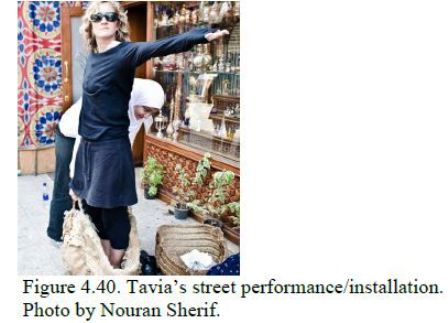 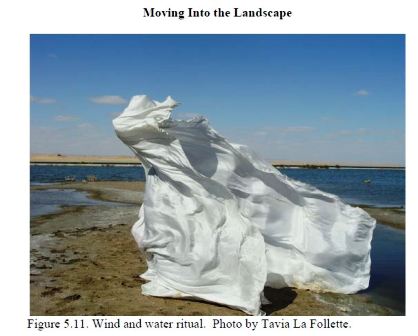 La Follette, T. (2013). Sites of Passage: Art as Action in Egypt and the US-- Creating an Autoethnography Through Performance Writing, Revolution, and Social Practice. https://aura.antioch.edu/etds/24