“El No Murio, El Se Multiplico!” Hugo Chávez : The Leadership and the Legacy on Race

Cynthia McKinney Ph.D. is a 2015 graduate of the PhD Program in Leadership and Change at Antioch University. 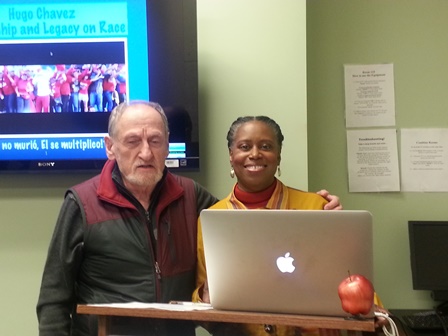 Note: This dissertation is accompanied by a MP4 author introduction, a PDF Dissertation Supplement and 4 participant files : 1 MP3 audio and 3 MP4 videos. All are accessible at the bottom of this page

“Chávez, Chávez, Chávez: Chávez no murio, se multiplico!” was the chant outside the National Assembly building after several days of mourning the death of the first President of the Bolivarian Republic of Venezuela. This study investigates the leadership of Hugo Chávez and his legacy on race as seen through the eyes and experiences of selected interviewees and his legacy on race. The interviewees were selected based on familiarity with the person and policies of the leadership of Hugo Chávez and his legacy on race. Unfortunately, not much has been written about this aspect of Hugo Chávez despite the myriad attempts to explain his popularity with the Venezuelan people up to the time of his death. It is expected that, as a result of this research, a clearer picture of Hugo Chávez will emerge. The resulting profile of Hugo Chávez focuses on him as a person of power as well as of color—of African and Indigenous descent—who was able to free himself from a colonial mindset (and its oftentimes accompanying internalized racism) and thereby gain the attention of oppressed peoples across the planet who sided with him as he used his power to challenge neoliberalism, the U.S. government, and those who wield power on neoliberalism’s behalf inside Venezuela. This research serves as important infrastructure for understanding Hugo’s race-conscious leadership in resistance to internalized racism and European domination. This dissertation is accompanied by an MP4 author introduction, a PDF Dissertation Supplement and 4 participant files : 1 MP3 audio and 3 MP4 videos. This Dissertation is available in open access at AURA: Antioch University Repository & Archive, http://aura.antioch.edu/ and OhioLink ETD Center, www.ohiolink.edu/etd . 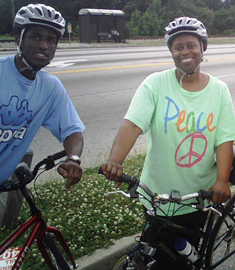 After serving in the Georgia Legislature, in 1992, McKinney won a seat in the U.S. House of Representatives. She was the first African-American woman from Georgia in the U.S. Congress. She was the first Member of Congress to demand an investigation of the events of 9/11/2001. McKinney was criticized and as a result, she was defeated in 2002; however, she ran again and was re-elected in 2004.

In 2005, McKinney was a vocal critic of the government’s response to Hurricane Katrina. Cynthia introduced legislation to release documents related to the murders of Dr. Martin Luther King, Jr. and Tupac Shakur. She was the first Member of Congress to file articles of impeachment against George W. Bush; and she voted against every war-funding bill put before her. In 2008, Cynthia McKinney won the Green Party nomination and ran for U.S. President.

In December 2008, Cynthia made international headlines when her boat was rammed by the Israeli military as she was attempting to deliver medical supplies to Gaza. In 2009, Cynthia attempted to reach Gaza again, this time armed with crayons, coloring books, and school supplies. Her boat was overtaken in international waters by the Israeli military and she was kidnapped to Israel. Cynthia spent 7 days in an Israeli prison. Finally, Cynthia entered Gaza by land in July 2009 with George Galloway's Viva Palestina.

Cynthia completed a cross-country bicycle ride with Bike4Peace 2010. In August 2011, Cynthia visited 21 cities to end the bombing of Libya. More recently, Cynthia participated in Malaysia’s Perdana Peace Organization and served as a Juror on the Bertrand Russell Tribunal on Palestine.

In 2015, Cynthia completed her Dissertation on the transformational leadership of Hugo Chavez and was awarded a Ph.D. in Leadership and Change.

a) Chapter: "Libya, Syria, Venezuela, Ukraine: Another War Based on Lies, Pretexts, and Profiteering?" in Flashpoint in Ukraine: How the US Drive for Hegemony risks World War III, edited by Stephen Lendman. Clarity Press, 2014