Scales of Resilience: Community Stability, Population Dynamics, and Molecular Ecology of Brook Trout in a Riverscape after a Large Flood

Erin V. Rodgers is a 2015 graduate of the PhD Program in Environmental Studies at Antioch University, New England. 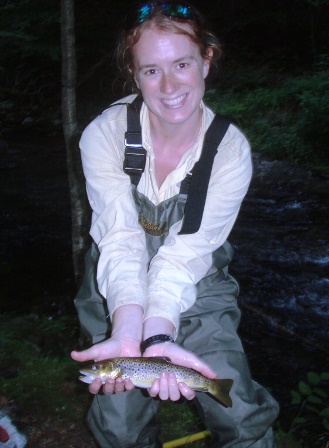 Climate change in the northeastern United States currently and in future decadal predictions is characterized by warmer average temperatures and more frequent and intense storm events. Many aquatic organisms that thrive below a certain temperature threshold, such as brook trout, are being pushed towards their upper thermal limits, ultimately lowering their probability of survival and resilience to disturbance. In late-August and early-September 2011, Hurricane Irene and Tropical Storm Lee created an extended flood in the Delaware Water Gap region of Pennsylvania and New Jersey, as well as much of the northeast. This dissertation examines the effects of this flood on a network of naturally fragmented tributaries in the Delaware Water Gap National Recreation Area. All study sites showed significant changes in mesohabitat and in-stream large woody debris. Because of the area geology, downstream reaches of tributaries were more disturbed, exhibited significant changes in substrate composition, and had a greater loss of species richness. Abundance of all species varied significantly between years, in some locations increasing 500% between 2011 before the flood and 2012 after the flood. Displaced adults and massive increases in young-of-year recruitment should indicate a substantial change in genetic diversity and differentiation over time and space. In fact, pairwise Fst (a comparative measure of genetic differentiation) showed significant differences in nearly all study populations before and after the flood. Of even greater concern was an increase in fixed monomorphic loci in multiple populations. A rich and well-conserved landscape provides the resources necessary to build resilient stream communities and populations after a large disturbance. However, fine scale examination of population genetics show a much graver trend in species health due to fewer reproducing adults and higher offspring survival the following year. Such genetic homogenization increases the likelihood of inbreeding and susceptibility to disease and other long-term environmental stressors. The electronic version of this dissertation is at OhioLink ETD Center, www.ohiolink,edu/etd

Erin Rodgers received her doctorate and masters degrees from Antioch University New England and her BS from New College of Florida in marine biology. Upon completion of her degree Erin is working with the non-profit stream conservation organization Trout Unlimited to develop their science and research program in the northeast and mid-Atlantic regions. Her work focuses on stream connectivity, new approaches to habitat restoration techniques, and working with communities to redesign and replace road-stream crossing infrastructure (culverts and bridges) to decrease structural failure during floods.

Figure 2: Topographic map of the Delaware Water Gap National Recreation Area. Note the steep rises in the northwest and southeast regions of the park. 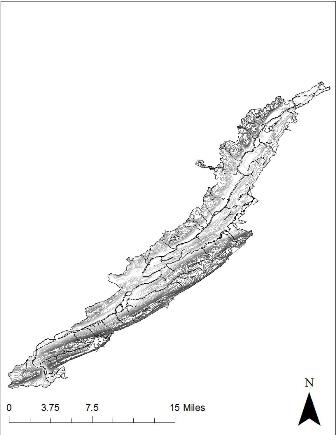